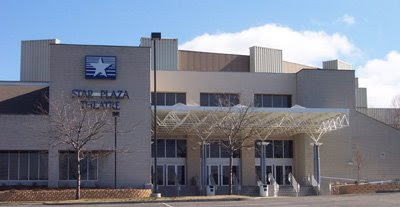 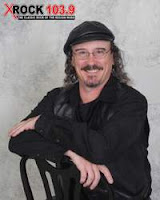 "It'll be like getting a live greatest hits album on stage with a few surprises," said Carl Giammarese, co-founder of The Buckinghams, voted "the most popular band in America of 1967" by national teen publications of the era.

And hits they had. The Buckinghams dominated the national pop charts and radio playlists from 1966 to 1968 with a steady stream of singles anchored by catchy melodies, tight harmonies and sporting titles like –– "Kind Of A Drag," "Hey Baby (They're Playing Our Song)," "Don't You Care," "Mercy, Mercy, Mercy," "Susan," and their indelible version of the old Lloyd Price classic, "Lawdy Miss Clawdy."

"When we first started, I was a senior at at Lane Tech High School and the guys would come and pick me up at school so we could get to a gig," Giammarese said. "Our manager Carl Bonafede had this station wagon and we'd pull a trailer with our stuff in it to places as far as South Dakota, do a show and drive all the way back so I could be in school. It was crazy."

Soon after forming, The Buckinghams landed a house gig for 13 weeks on the hugely popular WGN-TV variety show, "All Time Hits." The exposure got them signed to regional record label USA Records.

When AM radio giant WLS -- whose signal reached across all of North America -- jumped on The Buckinghams first single, "Kind Of A Drag," it shot to No. 1 and Columbia Records soon bought out of their USA Records contract.

Success came so fast the boys were rushed into the studio to complete their first LP for the legion of screaming Buckinghams fans that popped up seemingly overnight.

"We recorded a lot of the songs we'd been doing in our live show at the time," Giammarese said. "That first album was done at the old Chess Studios, 2120 South Michigan Ave., where legends like Muddy Waters, Bo Diddley and Chuck Berry had recorded their early stuff."

By the end of 1967, The Buckinghams had appeared on the cover of every major teen and pop culture magazine. They were voted by teen readers as "the most popular band in America," while Cashbox Magazine declared them "The Most Promising Vocal Group in America."

"Man, it all happened so fast," Giammarese said. "We were just kids playing school sock hops and then suddenly we were on shows like ‘American Bandstand', ‘Ed Sullivan,' and ‘The Smothers Brothers Show.'"

"And you know what? I enjoy doing it as much today as I did then," he said. "I can't tell you how gratifying it is to see people come out to hear the songs and see the band. We've got the greatest fans!"

"Chicago Hitmakers" with The Buckinghams, Ides of March featuring Jim Peterik, and Ronnie Rice formerly of The New Colony Six.

The opinions expressed are solely the writer's. Reach him at beatboss@aol.com

TONITE AT THE STAR PLAZA THEATRE 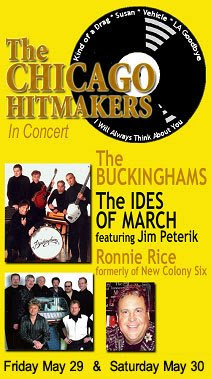 The Chicago Hitmakers, starring The Buckinghams, The Ides of March, featuring Jim Peterik, and Ronnie Rice, formerly of New Colony Six.
Purchase tickets by phone: 800-745-3000 or www.ticketmaster.com
Stop by the Star Plaza Theatre Box Office today from Noon-7 pm, or any Ticketmaster Outlet
Posted by The Buckinghams in Concert at 6:00 AM No comments: