There's no doubt that The Buckinghams are beloved in the South, just as much as they are in the Midwest, Northeast, and Western United States. After all, "Kind of a Drag" went to #1 in the country in Little Rock, AR before it was #1 across the country on the Billboard charts. Friday, March 4th, The Buckinghams traveled to Conway, Arkansas to the campus of the University of Central Arkansas and the stately Reynolds Performance Hall for a concert with Blood, Sweat and Tears, who opened the evening with a superb concert with a rich, royal version of "Spinning Wheel."

The Buckinghams first releases on Columbia Records were produced by the band's manager, James William Guercio. Following on an excellent first Blood, Sweat and Tears album, produced by band member Al Kooper, Columbia Records asked Guercio to produce BSandT's second album, "Spinning Wheel," which was nominated for 3 Grammy Awards, before winning for Best Instrumental Arrangemeent for Fred Lipsius, sax player for BSandT. The concert in Conway was a musical 'full circle' for the two great bands to present audiences with the great pop rock horn sounds initiated by The Buckinghams and carried to further success by BSandT. The roots of rock and roll are rich and run wide indeed. DLW 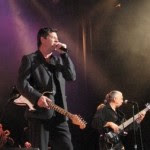 From a review by Allyson McNabb, posted March 6, 2011 in My Fountain online:

"After intermission, The Buckinghams took the stage to roaring applause and cheers. They opened with their 1967 chart- topping hit, “Don’t You Care.” The audience loved their “60s Medley,” which had the crowd clapping and nodding in time with the music. The Buckinghams chatted with the audience and told stories about their rise to fame." and

"They played their hit “Susan,” which they debuted on the Ed Sullivan Show. They closed with the classic rock song that made them famous, “Kind of a Drag.” The audience quickly rose to their feet with cheers. The band played an encore, then greeted people in the atrium of Reynolds."

Full review found at: http://www.myfountainonline.com/crowd-grooves-to-60s-rock
Posted by The Buckinghams in Concert at 9:28 AM No comments: