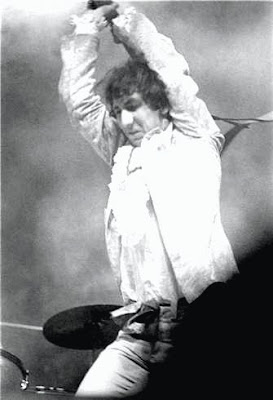 Inquiring minds want to know: when did Pete Townshend decide to destroy perfectly incredible guitars? Who, who came up with this attention-getting ploy? Was it in a band 'group meeting' or did he just strike out on his own one day, and Keith Moon followed suit by kicking his drums, and Roger, not to be left out, mauled the microphone...

People who watch any version of the CSI shows, whether CSI New York, CSI Miami, CSI Las Vegas, etc., are treated to a carefully controlled wildboy version of Pete Townshend's remakes of songs at the opening and closing of the episodes. Because audiences hear them each week, it's easy to expect that a second and third generation of young rockers think the tunes, made famous by The Who, are now enjoying new life as considerably more 'contemporary' music. Little do they suspect that some 45 years ago, the lads were new in town, new in the USA and new to the simple courtesies of not destroying the equipment for the next guys on stage. Buck Munger, storyteller and guitar anthologist continues on in last month's posting re The Who, The Buckinghamsm, Sunn Amplifiers, and the Eve of Destruction...but not the kind in the song.


From Buck's blog:
"I watched Pete get especially active with the solid body Gibson SG, chipping chunks out of the beautiful floor. Moon’s cymbals were digging nice scratches too. The school officials were going ballistic waving their arms trying to stop the performance but attracting no attention. Pete whirled and kicked over the PA-head, …which bounced off the floor and immediately started to hum loudly. The teachers may have been freaking out but the kids loved it. After a few more minutes of mayhem Pete threw his mangled guitar down and stomped off. The other band members followed. The Buckinghams’ roadies swarmed the PA, swearing. Bobby Pridden sprang into action rallying his volunteers to pack the stage and load the truck. The school officials were looking for an official representative of the band to complain to, and I seemed to be the only one not involved in the load-out. They asked me to follow them to a school office where they closed the door and informed me there had been extensive damage and the fire marshal had been called about the smoke machine. I assured them the band was fully insured and any damage would be covered. I then let them chew on me long enough for Bobby and the kids to get the truck loaded, handed them my Sunn card and excused myself. As I walked through the gym I could still hear the PA humming loudly. Back at the motel I was greeted like a hero when Bobby told the story."

Check out the link for the full story:
http://www.guitararcheology.com/2010/01/the-who-and-sunn-amps-part-4-by-buck-munger/

Peter Shelton, former Buckinghams' road manager and bass player for several bands, including The Outsiders and The Robin Hoods, is calmly testing out Sunn Amps at the showroom...little did he know what awaited his group's musical fate a bit later in the week. Shelton dealt with every kind of situation as road manager, but this one was, by far, one of the most challenging.

From The Buckinghams' online vintage archives, here are some calmer pictures of the concert, post-technical repair in Kansas City. The roadies really earned their salaries that night. Courtesy of www.thebuckinghams.com
Posted by The Buckinghams in Concert at 8:54 PM No comments: