Blast from the Past--Get with the Go Group, See Mr. Norm, Jingle by The Buckinghams, featured in Kent Kotal's Forgotten Hits 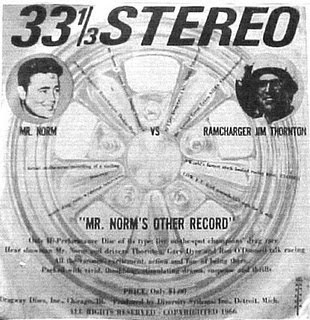 Thanks to WLSClark and Kent Kotal, here is the cover art that goes with The Buckinghams’ jingle for Norm Kraus, also known as Mr. Norm. Carl Bonafede, original manager of The Buckinghams, booked them often at Mr. Norm’s Sport Club for Grand Spaulding Dodge. Mr. Norm gave the band a van in exchange for this jingle that was played across Chicago radio stations.

The LP pictured is full of drag strip stuff at Ubly Dragway. The Buckinghams jingle is 20 seconds that show up on the end and beginning of the LP side which runs a full 13 minutes of drag stuff similar to the Capitol Records series of Lps. Note it sold for $1 then. Now, it would bring $100 probably.
WLSClark


“Get With the Go Group!” by The Buckinghams

Posted by The Buckinghams in Concert at 7:53 AM No comments: