When you get a concert ticket to a show you're looking forward to, you’re not expecting anything out of the ordinary beyond a great performance.

For Chicago filmmaker Pamela Pulice, though, Saturday’s Cornerstones of Rock Concert was an unforgettable surprise, thanks to the generosity of Arcada Theatre owner Ron Onesti and the Cornerstones artists. [Photo by Jim Summaria.] 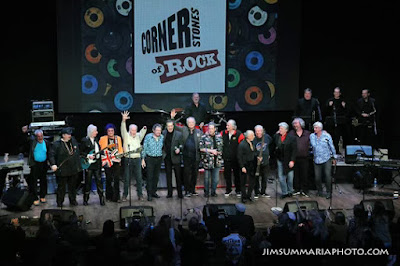 When Ron called Pam Pulice and Joseph Farina, Director of Marketing & Communications for the film, to the stage, they didn't realize that two music lovers were in the audience, both of whom were poised for maximum generosity, could change the film's future so quickly. Backstage, all the musicians of the Cornerstones bands had autographed a guitar for auction. Onesti went to work as auctioneer and funds for the Biondi documentary were secured. In fact, a second guitar was signed and auctioned to another winning bidder for the same amount. 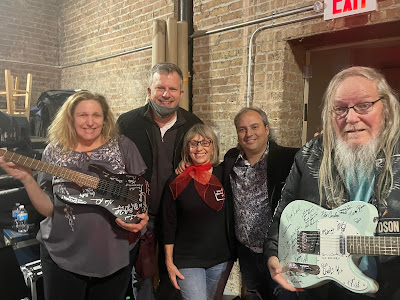 This photo shows Ron Onesti, Pam Pulice, and Joe Farina, congratulating Greg Ellis and Lynn Steffen for the guitars they won, each with winning bids of $3,500. These funds, together with monies Onesti helped Pulice and Farina raise at the September Cornerstones concert were--at last--sufficient to pay for the remaining music licensing needed to take the documentary to the next level.

Yes, even more contributions are needed before fund-raising concludes, but this was a major hurdle that was achieved thanks to substantial generosity by all involved. They are “almost” to the finish line. Yes, you can ask how many more times can fans hear that and not be slightly frustrated, and you'd be right. Then, you just have to ask yourself how many people would be touched by the inexplicable desire to offer homage and respect to a man on the radio whose kindness to Chicagoland teens and up and coming bands would change their lives forever?

It's more than special that the two winners of the bidding on the guitars are Ellis and Steffan.

Saturday's Cornerstones event marked the 127th time in the past years that Greg Ellis has seen The Buckinghams perform in concert. That's in Chicagoland and regionally as well. Greg has traveled to support the music of the band he highly respects and he has the ticket stubs as well as some videos he posts on Facebook. That's a record number of concerts for any one fan to have attended.

Also, Lynn Steffen has been on board as a major sponsor of the Biondi film for at least two years. You can see a brief clip of Lynn with Joe Farina here:

Here’s a trailer of the film hopefully to appear commercially very soon:

If you listened to Dick Biondi during any of your teenage years, whether he was on air at WLS in Chicago, or in Los Angeles or on any other station where "the wild Itralian" was broadcasting, find out how to join this worthy endeavor here.

Posted by The Buckinghams in Concert at 7:12 AM No comments: