Classic rock is alive and well and on tour in 43 cities nationwide, beginning tonight in Columbus, Georgia, much to the delight of all baby boomers who want summertime entertainment. The tour gives audiences another chance to relive some of the greatest classic rock music of the summers of their youth. Five musical acts comprise the Happy Together Tour this year, anchored by The Turtles, whose invitation to The Buckinghams, Micky Dolenz of The Monkees, Gary Puckett, and Grass Roots guarantees great music and some really fun onstage antics, courtesy of Mark Volman and Howard Kaylan’s ad libs and zany senses of humor. 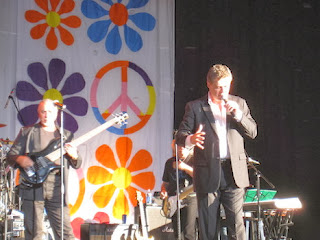 With an outstanding backing band, three members of whom are repeating this tour with the artists for their third year, the shows stars are able to each share all their hit songs for the audience with no “down time” for band gear changeout. Tour producer Ron Hausfeld has found this system to work each year and the audience is guaranteed 2.5 hours of continuous entertainment. Tickets range from $25-$50, depending on the venue. Some venues provide VIP seating; check the links to each show provided in the list here.

The public is invited to start their summer vacation with some of the best music of the 1960s and 1970s in the pop-rock celebration of harmony. The Happy Together formula for fun is anchored by Mark Volman and Howard Kaylan of The Turtles, Carl Giammarese and Nick Fortuna of The Buckinghams, Micky Dolenz of The Monkees, Gary Puckett, and Mark Dawson and Dusty Hanvey of the Grass Roots.

The Turtles, The Buckinghams, and Grass Roots are making their third consecutive appearance celebrating the (now) 27th anniversary of the 1985 tour, of which they were they were a part. That 1985 Happy Together Tour was named one of the Top 10 grossing tours of the year nationwide, comprising 190 concerts and lasting 7 months. This year’s tour will conclude August 30th at the New York State Fairgrounds in Syracuse, NY.

Here's a video from the encore of the Happy Together Tour 2011:

Posted by The Buckinghams in Concert at 6:26 PM No comments: