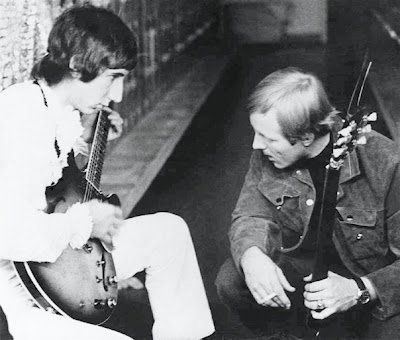 The Who's Pete Townshend with Sunn Amplifier's Buck Munger

Unparalleled raconteur Buck Munger recently provided powerful words and great memories in photos from his blog on www.guitararcheology.com and the only way to do his words justice is to direct you specifically to his site. He spins a fascinating tale as a roving representative of Sunn Amplifiers, which was carving out quite a reputation as a musician-owned business in the midst of fierce competition to blast the sounds from a burgeoning revolution in amplifiers.

In a recent radio interview, Carl Giammarese told a story about how The Who was once an opening act for The Buckinghams. The Bucks were ill prepared for the onstage antics of their then warm-up act. An excerpt from Buck's blog "The WHO and Sunn Amps Part 3", by Buck Munger:

"In Kansas City, the Who were opening for the Buckinghams (“Kind of a Drag”) who were on their fifth hit single on Columbia from producer Jim Guercio. The sound check was short and friendly and the Buckinghams agreed to let the Who use their PA to keep the set change to a minimum. The mostly teenaged audience filed into the hall looking white, upper middle class and bored. When the Who walked out on the stage in their Carnaby clothes the first few rows of standing students pressed forward to get a better look. The venue for the Who/Buckingham confrontation was a new high school gym. The bands performed on a stage made from beautiful inlaid wood. The Who launched into their set and got a good reaction to “Boris The Spider”, which I had learned that afternoon, Entwistle wrote. The rest of their set was received politely, but attentively. For the finale, Pete announced a song that would be released in the US within weeks “I Can See For Miles”. A few chords in, the audience came alive, and I found my new favorite Who song. As the finale built Bobby switched on the tiny smoke machine and the shit hit the fan. Pete started swinging his guitar like a pickaxe, Moonie kicking over his drums, Roger swinging the microphone in large arcs and bouncing it off the floor. I noticed several school officials spring into action. Nobody had warned them about this madness."

To be continued...
Posted by The Buckinghams in Concert at 9:46 PM No comments: