To those in Chicago who look forward to attending the annual Columbus Day Parade, it is especially memorable for those of Italian heritage, thanks to Christopher Columbus for discovering America. The year 2021 Parade marked the 69th annual parade, held on State Street. 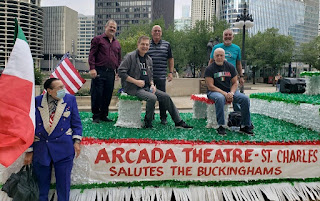 Pride in one’s family heritage runs strong, in Chicago and in every city across the country, but in the case of the Columbus Day annual celebration, one need only look to the JCCIA, which stands for the Joint Civic Committee of Italian Americans. [Photo courtesy of San Filippo Foundation, Facebook page.] 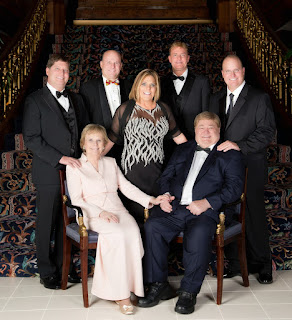 When JCCIA current president Ron Onesti, CEO of Onesti Entertainment (The Arcada, Des Plaines Theatre, and several other venues), was planning for the 2021 Columbus Day Parade, he reached out to the Sanfilippo family (Jasper Sr.’s widow, Marian, and their five children continue to be involved in the success of the business today—John, Jim, Jeffrey, Lisa, and Jasper).

Jasper Sr. had instilled his personal pride and passion in his family and his employees to work your hardest and best to help your community. The family gave Onesti their permission to dedicate this year's parade to Jasper Sr., who died Jan. 28, 2020. COVID-19 safety precluded a 2020 Columbus Day Parade from taking place.

The 2021 parade took a little over an hour and was covered in its entirely on ABC7-TV with hosts Ryan Chiaverini, Val Warner, and Anthony Rago. The result was an unforgettable parade, which can be replayed in full (click here). Of greatest excitement to The Buckinghams’ fans, though, is the very end; click below to see The Buckinghams' specific segment of the parade:

Looking closely, you’ll spot Carl Bonafede, aka The Screamin’ Wildman, of Chicago radio fame in the 1960s and beyond.

Bonafede was also the first manager of The Buckinghams in the early 1960s before they broke out into either local or national prominence. The fans still love Bonafede, an icon in his own right, a contemporary of legendary radio DJ Dick Biondi.

Bonafede and The Buckinghams remain close today. As recently as this past summer, before a recent Chicago concert, Bonafede came to introduce The Buckinghams to a very appreciative crowd.

Carl and Nick always remember the hard-working enthusiast who brought them from the garage into the living rooms around the country in a friendship that has endured over 65 years now.

That’s just a little more Chicago history from the world of rock music and local civic pride of individuals who love living and being based in Chicago.

Thanks to the JCCIA, Chicago residents will long remember the Screamin' Wildman, Carl Bonafede, and of course the band they've loved for over 50 years, The Buckinghams.

As the end of 2021 approaches, and we look back on every kindness that has been shown to those we regard, it's really so uplifting to see, particularly in the case of Carl Bonafede, no matter how far you go in you career and how many accomplishments you have, remembering who brought you to national prominence in the beginning and keeping them close in your heart, is most important.

Carl Bonafede continues to be the vital and enthusiastic supporter of The Buckinghams that he was from Day One, the days of the Holiday Ballroom record hops.

If you are looking for a nice Christmas gift for your music lover, check out his biography, "The Screaming Wildman: Vibrations from the Dawn of Chicago Rock," by Carl Bonafede, edited by Joel Bierig.

Posted by The Buckinghams in Concert at 1:05 PM No comments: