Paul Shaffer Visits Friends on the Happy Together Tour 2019

It's always a nice surprise when you have fellow musicians drop by backstage after the show to say hello and catch up for a few minutes. After the Happy Together concert at the Bergen Performing Arts Center in Englewood, New Jersey, multitalented musician Paul Shaffer came by to visit many of his friends. 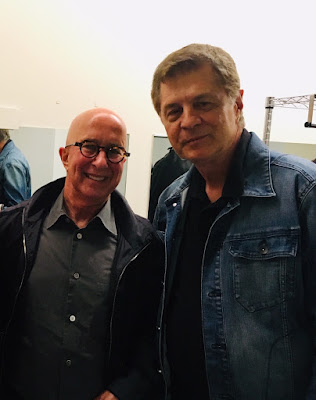 It's always great to see Paul. What an amazing collection of music he is responsible for! Of course you watched him for years every night on the "Late Show with David Letterman" as he conducted his "World's Most Dangerous Band." His book, "We'll Be Here for the Rest of Our Lives," is, as he subtitled it, "A Swingin' Show-biz Saga Book."

He talks about his years leading the Saturday Night Live Band, leading the Blues Brothers Band, and then the Late Show band and TV personality. Get the book here. Do you have a CD of their cover songs? (Find one here: https://theshaffershop.bigcartel.com/). 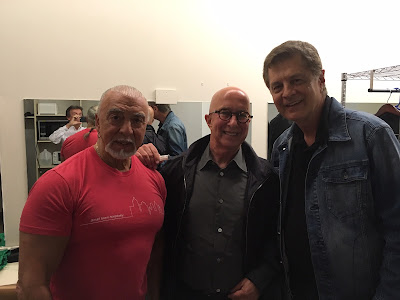 Here's a photo of Nick and Carl with Paul, taken by Tom Garrett.

Below is a picture of Carl, Gary Puckett, Paul, and Tom Garrett. 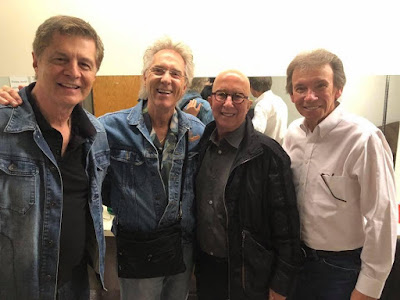 There's another Happy Together connection with Paul Shaffer--his good friend Ron Dante. This pic, of course, was borrowed from Ron's IMDB page. Ron produced mega-successful albums for Barry Manilow, Cher, and Pat Benatar, in addition to being the voice of many songs you grew up loving but never really knowing "who's singing on that song?" 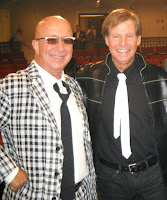 As Paul Shaffer noted on a former "Late show with David Letterman" show, Ron is the person who gave Paul Shaffer his first break in the music business, as you'll see he mentions in the video. Ron played during all the commercial breaks with Paul and his Most Dangerous Band, including the amazing guitarist/vocalist/percussionist, Felicia Collins and bass player Will Lee. Paul's entire band was collectively known as the CBS Orchestra.

And, you'll love the connection between The Buckinghams and Paul Shaffer that goes back over 50 years, but it's entirely by serendipity that it happened. You remember how Paul grew up listening to the music of Chicago bands, especially The Buckinghams, at nights in Thunder Bay, Ontario, Canada, as he could pick up the 50,000 Watt signal from Chicago's WLS-AM radio. He knew the voice of our first manager, Carl Bonafede, very well as Carl used to do all the overnight radio commercial spots himself. 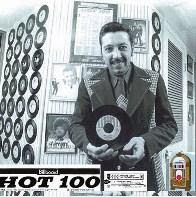 In addition to being The Buckinghams' agent and band manager, Carl hosted a lot of music events (called dances or sock hops in the old days) across A clever radio ad man, Carl Bonafede would go around and get sponsors to buy air time to advertise their products and then he'd go into all the radio stations across Chicago and record his ads.

Using his own voice, you would have to know Carl to know that he's one of the fastest talkers in all of radio and he can give you two minutes worth of advertising in thirty seconds. He also has a way of showing his excitement about a project, a product, or a person that gets you all worked up about it, too. That's why he was often referred to as "The Screamin' Wildman!" 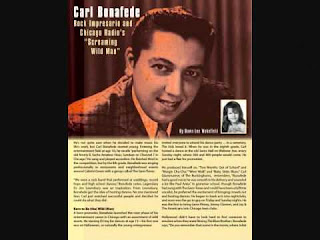 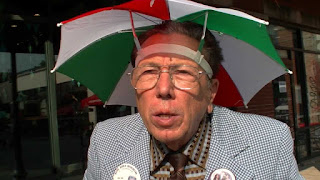 We used to say he was the hardest working man in music; he still is today. This is a recent photo of Mr. Bonafede selling his famous "Umbrella Hats," perfect for wearing over your head to keep the sun off you, especially on a hot day at Wrigley Field while watching a Cubs game, right?

So, when Paul used to have the band occasionally play "Kind of a Drag," coming back from commercials on the show, he always said, "The Buckinghams from Chicago, managed by 'The Screamin' Wildman,' Carl Bonafede." One night, Mr. Bonafede remembers, he was watching Dave's show with William "The Refrigerator" Perry as a guest. Because "The Refrigerator" was a Chicago Bear, the band was playing "Kind of a Drag," and Carl Bonafede remembers that as one of the highlights of his life, hearing Paul Shaffer say his name, noting that he couldn't imagine that he'd be remembered all those many years later.

Just like Paul Shaffer remembered Carl Bonafede, Paul Shaffer remembered the music he'd grew up listening to as a teenager himself in Thunder Bay, music from the earliest days of The Buckinghams, when they were on the USA Label in Chicago, before they'd signed with Columbia Records. The beauty of the circle of life that is the music business--it truly is a very small world.

And the tour keeps on rolling down the road. 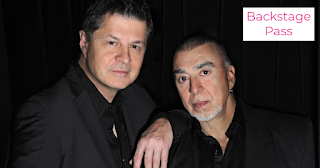 Posted by The Buckinghams in Concert at 11:30 PM No comments: