Jump Back to the 80s: New Video Release from Dave Mikulskis and Carl Giammarese

It’s after Thanksgiving. You’ve enjoyed the festivities, the football, and maybe got in some Black Friday shopping deals. Before you go back to work on CyberMonday, you might just need a shot of inspiration. Here it is. Check out the newest effort from two of Chicago’s favorite singers who are also songwriters in their rare moments off from performing.

Dave, you know from Hi Infidelity, the tribute band that makes you think you’re in the arena with Journey, Styx, and Foreigner when you hear Dave Mikulskis belt out the best of the 80s power ballads. He’s been voted Best Male Vocalist six times in the SuburbaNites annual “Best of the Burbs” readers poll.

Carl, you know well from The Buckinghams, as they have been iconic there since 1965. But, because he’s been behind the microphone so long singing up front, you might forget that he was also a premier Chicago guitarist since the 1960s. This song gave him a chance to play his beloved Paul Reed Smith guitar, a custom brand also favored by Carlos Santana, Robben Ford, Orianthi, and John Meyer.

They come together here on “Easy Lover,” a song first made famous in 1984 by co-writers Philip Bailey, Phil Collins, and Nathan East (in-demand bassist frequently seen touring with Toto and other Grammy winners). The Chicagoland duo worked across the Internet at first to find the right song and you can judge for yourself what you think. Dave Mikulskis is also a talented graphic designer and produced and directed the video. Click “Like” on the video if you agree.

The guys are working on a few ideas for their next duet. That’s just what busy musicians do when they do what love for a living. It doesn’t happen without an audience though, so consider sharing the link on social media as you wish.

Also, if you’re on streaming services, you can take this song with you wherever you stream your music. For example, check it out on Spotify here, add a heart, and add to playlists. Share the good news, and take a few friends along with you for the ride back to the 60s. 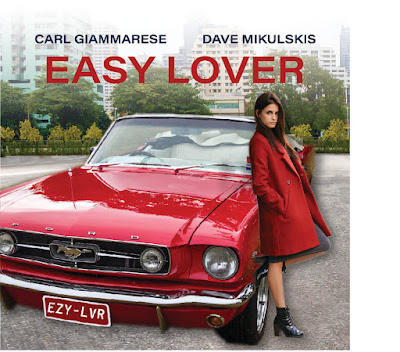 Find "Easy Lover" where you listen to streaming radio:

Posted by The Buckinghams in Concert at 9:17 PM No comments: