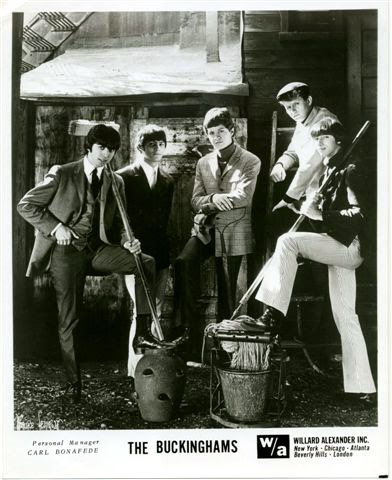 The Buckinghams looked like this in 1966, because of the influence of The British Invasion and, primarily, The Beatles. Rock and roll was never the same again!

This week of February 2014 marks the 50th anniversary of when John, Paul, George, and Ringo, influenced by Elvis Presley and "Hound Dog" and a lot of American rock and roll, came over to America, for a date on the Ed Sullivan Show, and changed American music forever.

NWI Times journalist Tom Lounges, who is also a popular radio host in the northern Indiana area, wrote a thoughtful column published Feb. 6, 2014 about The Beatles' influence. Carl Giammarese of The Buckinghams is one person Tom interviewed.

Click on the link to read Tom's complete story:
http://www.nwitimes.com/entertainment/music/beatlemanie-impacted-today-s-music-makers-near-and-far/article_679c9efa-62c4-526e-80e0-aee66eb60147.html
Posted by The Buckinghams in Concert at 12:10 AM No comments: