The Buckinghams as Noted Influence on the Band "Checkered Past" 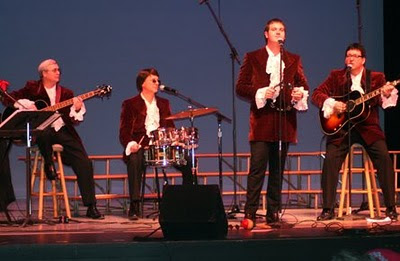 A recent Morris Daily Herald story noted the band, Checkered Past cited contemporary concerts by The Buckinghams as a place where today's college students were familiar with all the music of the popular 60s Chicago band. Event producer Ron Romero decided, after watching audiences at a Buckinghams' concert, that he wanted to form a 60s band. The group Checkered Past performed recently at the Morris Country Club in Grundy County, IL. An excerpt from Jeanne Millsap's Daily Herald story follows:

It only makes sense that guitarist/vocalist Ron Romero started up a band that plays 60s classics.

Music from that era seems to have grown to appeal to every generation, and Romero’s interest in music spans several generations in his own family.

Romero, of Minooka, plays the drums and guitar, and he sings. His older brother is an accomplished guitarist and organist; his father played trumpet in jazz bands; and his grandmother played piano, classical guitar, the mandolin, and other instruments.

“And she didn’t play any of those halfway,” Romero said of his grandmother. “She was quite an accomplished musician.”

Romero remembers getting his first drum kit when he was only four years old. He learned to play by just winging it. Later on, his brother Rick, who he said has been his greatest musical influence, taught him to play guitar.

Over the past 30 years, Romero has played in several bands. The area musician who has been the most influential for him is John Bednarcik.

Romero used to play blues with them in the 80s and even wrote some songs for their band, The Phones.

One of those original compositions — Undone — was played last week on an area radio station.

Romero picked up on music from the 1960s early on, even though that generation was a bit older than his. His brother and two sisters were older, and that’s the music he was exposed to when he was young.

“Sixties music has always been my thing,” he said. “It’s timeless.”

An event producer by profession, Romero noticed at a Lewis University concert featuring The Buckinghams how many college kids loved the group. They even knew the words to the songs and were singing along.

Involved in bands here and there for the last 30 years, Romero made the decision that night that he should get a 60s band together. It was music he loved, and it was becoming obvious to him that a lot of other people loved it, as well, even the younger generations.

In the earliest days of The Buckinghams' career, they were introduced to many new acquaintances and people were added to their team as the recording artists took to the road. Among their first road managers was a gentleman named Don Schoenborn, also known to the band as "Dano" and his memory is saluted with the reprinting of this Daily Herald story, written in October, 2009, by Eileen O. Daday. An excerpt follows.

Don Schoenborn made the transition most teenage music lovers only dream of: he parlayed his connections at The Cellar teen dance club in Arlington Heights into becoming the road manager for nationally recognized bands.

Mr. Schoenborn passed away on Sunday. The longtime Palatine resident was 67.

Family members say "Dano," as he was called, loved The Cellar and its draw as a local music venue accessible to teens. He had graduated from Palatine High School in 1960 and was not a musician himself, but he loved the sound of rock 'n' roll.

One of the hit bands to come out of The Cellar was the Shadows of Knight, originally formed by Prospect High School students. With its release of "Gloria" in 1965, the single drew lots of regional play on its way to topping the charts.

As the band began touring, Mr. Schoenborn went with them, earning the role of road manager.

"He handled all the business aspects of their tours," his brother, Paul, says, "from the bookings and support systems, to travel arrangements. He was the detail guy."

Mr. Schoenborn later moved to take on the same role with a split-off band, called Bangor Flying Circus, before he hit the big time, serving as road manager for the Buckinghams.

"He was with the band in the beginning, when they had their first two hits, 'Don't You Care,' and 'Kind of a Drag,'" Paul Schoenborn adds. "Those were the songs that put them on the map."

The story story continues at:
http://www.dailyherald.com/story/?id=328861
Posted by The Buckinghams in Concert at 6:58 PM No comments: