Buckinghams Ready to Rock for a Cause

The Great River Block Party is a wonderful annual charity event created to raise funds for Juvenile Diabetes in Onalaska, WI, in August. The Buckinghams were invited to be the headliners for the 2nd Annual Great River Block Party at Thomas G. Rowe Park in Onalaska.
"Last summer, longtime Onalaska resident Jim Guenther was having a cup of coffee in Maggie’s Restaurant, which he co-owns with chef Mary Cody, pondering the seemingly endless highway construction that put the restaurant on a dead end until the work was finished. The thought came to him, “What if we just had a block party while construction is going on?”
About that time, the old Doobie Brothers’ song “Takin’ It to the Streets” came on the restaurant’s speakers, so Guenther took that as a sign his idea was a good one. Guenther booked the band 38 Special. Presto, the initial block party event was a major hit, Residents finally had something exciting to think about besides bulldozers, concrete and crains.
Meanwhile, John Haverty, a civic-minded mover and shaker and Harley-Davidson enthusiast, had been involved for the past decade in raising funds through the annual Thunder Ride to Cure Diabetes event, which benefits area children diagnosed with diabetes. It’s a cause close to Haverty’s heart, since his 16-year-old son, Joey, was diagnosed with the disease when he was just 22 months old." 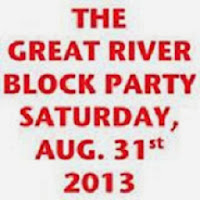 Here's a link to the rest of the story that originally ran in the Onalaska-Holmen Courier-Life on August 21, 2013.
Posted by The Buckinghams in Concert at 10:19 PM No comments: