This story is one for the archives! On Valentine's Day 2017, the ultimate entertainment producer and grand host, our very good friend, Ron Onesti, welcomed Chicago natives back into his "home stage" in St. Charles, the one and only Arcada Theatre. 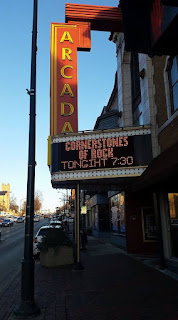 Thanks to Pamela Pulice of the Dick Biondi Film Project for sharing a photo of the marquee.

The music of Jimy Sohns, Jim Peterik, Ronnie Rice, New Colony Six, the Cryan Shames, The Ides of March, Colin Peterik, Ted Aliota, and The Buckinghams was heard to another sold-out crowd and even the Dick Biondi Film Project team was on hand, doing live broadcasts from the Arcada for people to enjoy on Facebook. Snapshots of each group performing were shared so people who couldn't get there would be included in the fun.

Ron writes as well as he produces concerts, so we'll share the first three paragraphs and then give you the link so you can read the original article for its own beautiful self. Ron, as always thanks so much for being the consummate host and for helping everyone relive our teenage years one more time!

"Another edition of "Cornerstones of Rock: American Garage" at The Arcada Theatre is over, and boy, what a night it was! This was the fifth production of this historic presentation, and fans still could not get enough.

This show featured those amazing garage rock pioneers from Chicago who kicked off a national sensation that helped 1950s-era rock 'n' roll make the transition to the harder edged rock of the Sixties.

Being from the neighborhoods of inner city Chicago myself, I know exactly where these bands came from, and how they evolved. Summer nights, garage doors open in the alleys with 55-gallon metal garbage cans surrounding a splintered-wood telephone pole. This was in 1964, 1965, 1966. The British invasion was in full swing and local bands like the Buckinghams and the New Colony Six were planning their American music counterattacks."

Your words ring true and are poignant:

"Within our packed houses of 900+ music lovers are individuals with major family issues -- maybe the loss of a loved one, problems at work or financial woes. But for a couple of hours, they are able to forget it all, dance and sing to the music of their younger years. How cool is that?"

Posted by The Buckinghams in Concert at 8:52 PM